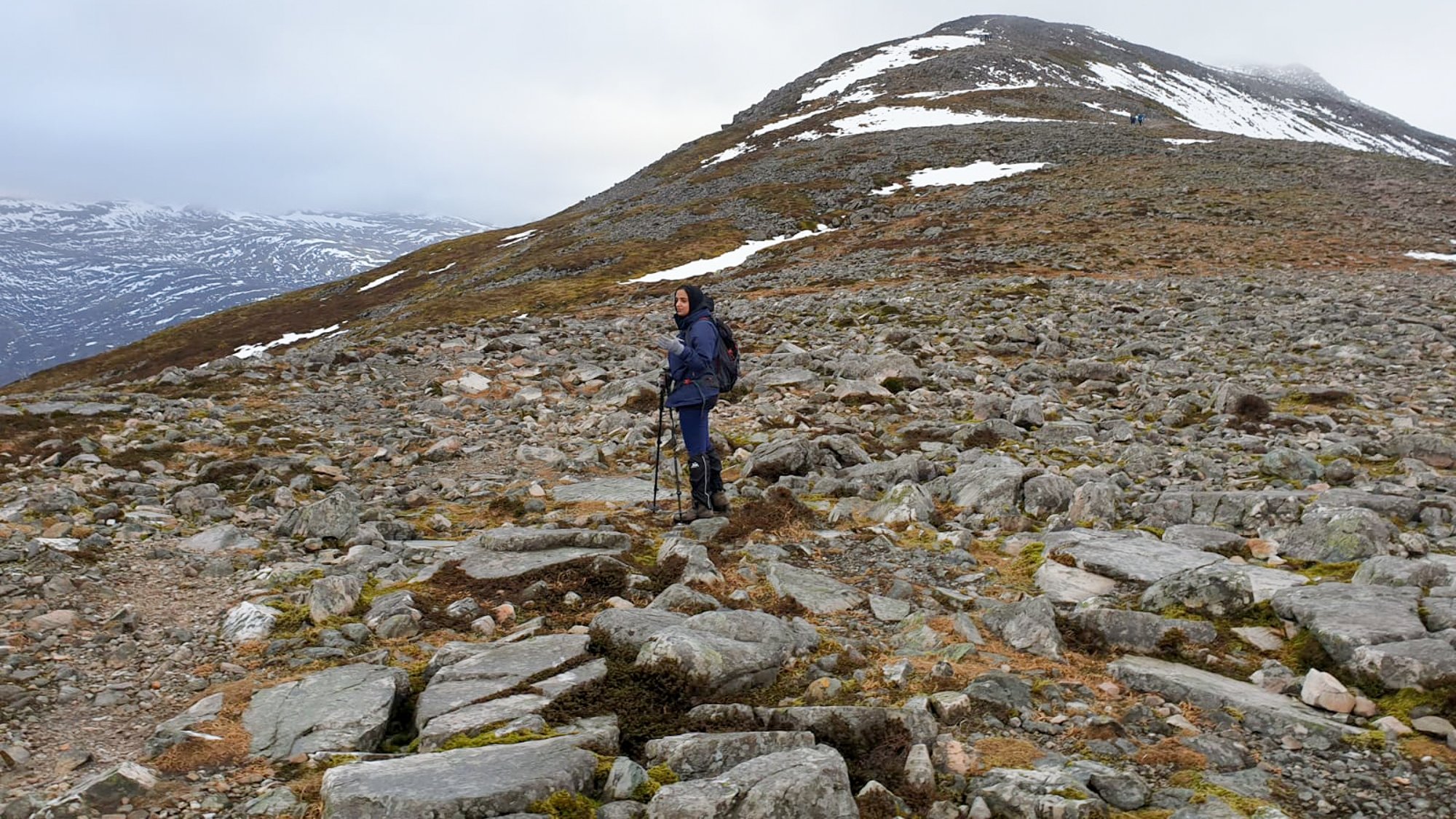 Zahrah Mahmood: “The outdoors is my mosque”

Zahrah Mahmood – a self-proclaimed loud mouse – is a force to be reckoned with. At age 29, the Scottish Muslim hillwalker inspires over 4.000 followers with her stories from the Scottish hills and mountains. But being one of the few hijab-wearing hikers in Scotland comes with its own set of challenges.

What sparked your passion for spending time in nature?

A few years ago, I was struggling hard whilst studying for my exams. I put so much pressure on myself that I made myself unwell, mentally and physically. Two friends of mine took me out hillwalking on my birthday to clear my head. At that moment, I didn’t even know what that was! We went to Ben Lomond, which is over 3000 feet, and it took us a full day to walk it as I was so out of shape. And even though the walk was nice, during the whole ascent I was very aware of people staring at me. I didn’t know if it was because of my fitness,  my skin color, or my hijab, but I felt very out of place. Clearly, I thought, this isn’t for me.

Over the following months, I joined the gym, did a few fundraising walks and started to feel more confident. So the next time I was struggling to get out of my head, my friends took me out again, but to a smaller hill. That was it. I remember not thinking about anything the whole time, except for putting  one foot in front of the other. It was a real turning point – I’ve been hillwalking almost every week since then.

You’ve now been on hundreds of hikes. Do you still encounter the same reactions as on your first walk?

I know I stand out on the trail. I always cover my hair – I either wear a hijab or a hat. The choice depends on the weather, but also on my mood. Sometimes I just really don’t want to stand out, and wearing a hat helps. I’m still brown – I can’t change my skin color, obviously – but deconstructing the religious elements makes it a bit easier to blend in. 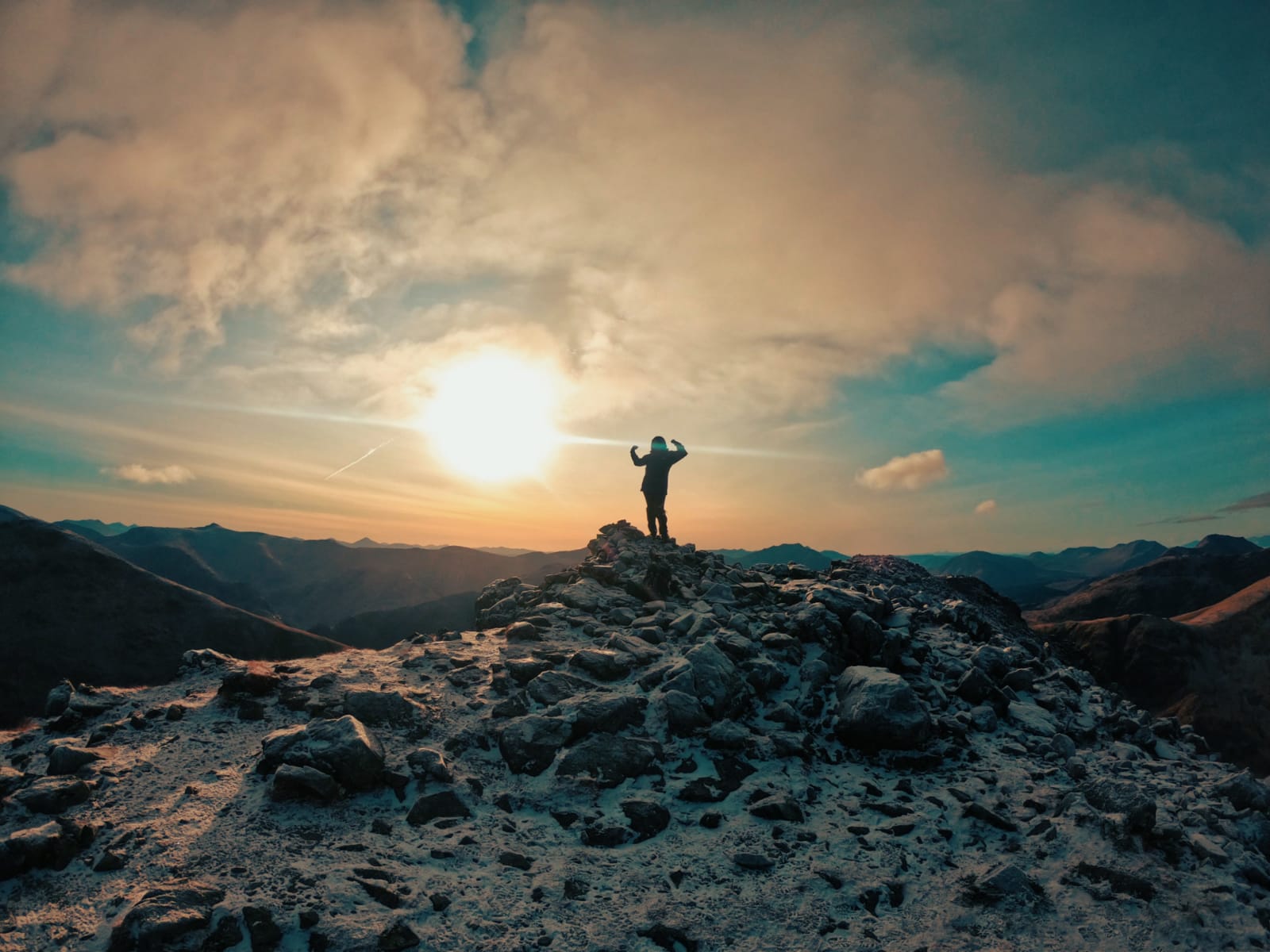 People on the trail often ask me if it’s my first time out, even when I can clearly keep up and I’m wearing all the right gear. They just assume that I’m a newbie because of how I look. I don’t think they’d stop someone else to ask that.

It is! I get outdoors to reset the  week and to make me feel in a better frame of mind for the week ahead. Some weeks, I don’t want to be stared at or have to explain myself. And I don’t have to on every hike, but I’m always preparing myself for it mentally. It takes up a lot of energy. I’m glad I’ve never had to face any serious prejudice while I’ve been hillwalking. But I shouldn’t have to be grateful for it, it should be normal.

Are you ever so sick of it you decide to stay home?

I don’t think so. Bad experiences have never kept me from going outside because I have great friends. I normally go hiking with my white friends, because they’re more into the outdoors than my Asian friends. I’ll just give them a heads up: I’ll tell them about some experiences, to put it in their heads and let them know I’m not in the right frame of mind. I might go someplace closer though, some place less rural.

I’m an outspoken person, but I’ve rarely been able to stick up for myself in moments where I’m confronted with racism. It leaves you so vulnerable, that you need people around you who’ll stick up for you in those situations. 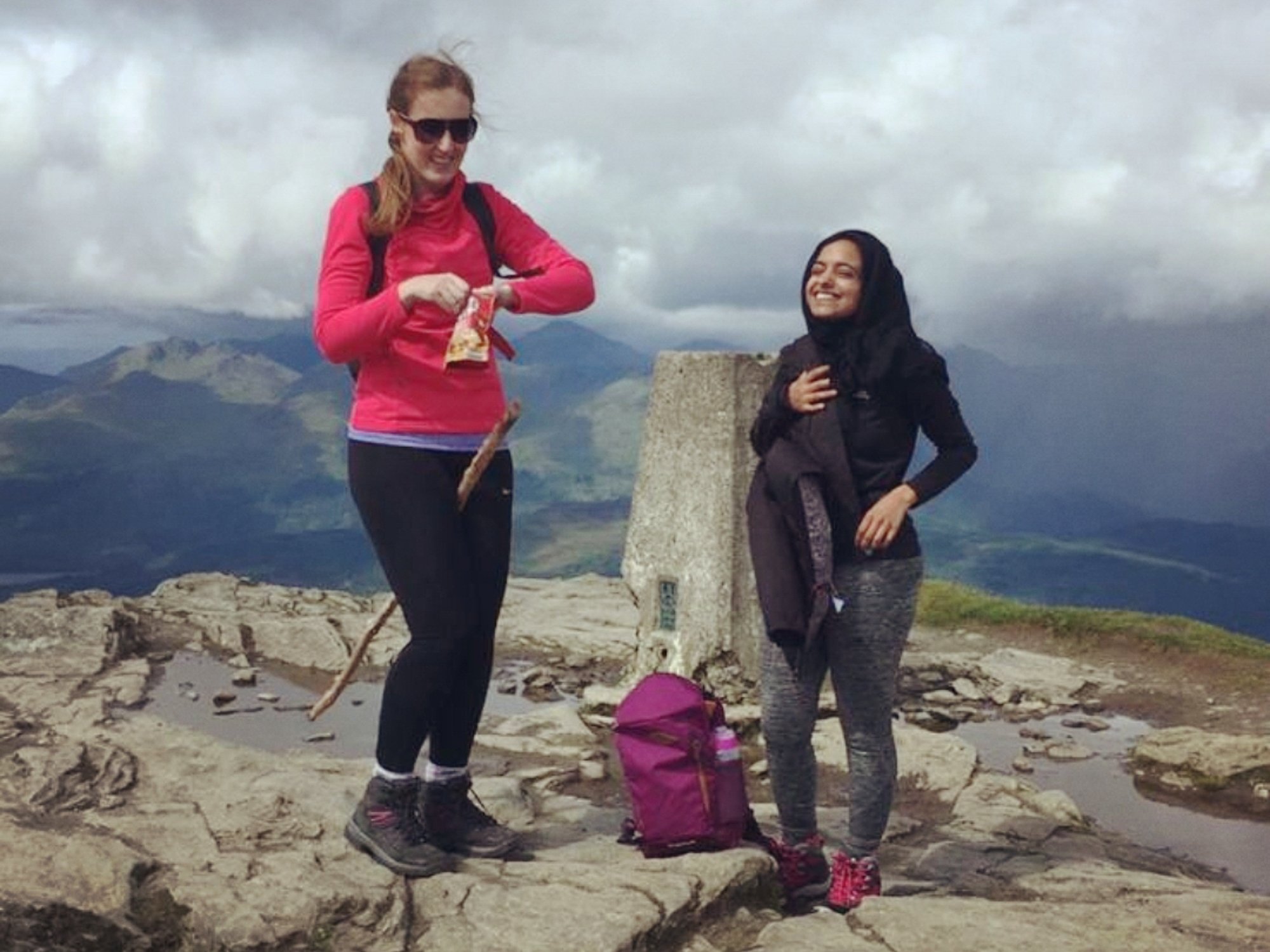 You’ve mentioned mostly going to the outdoors with white friends. Minority groups are much less likely to seek adventure and solace in our wilderness spaces. How do you view the gap of access to nature?

In my opinion, it all starts with representation. If you look at the companies, the marketing and the magazines: it’s not diverse at all. Even the pictures that show one black, brown or Asian person aren’t representative. They might tick all the boxes, technically, but they don’t build any connections.

The same things happen on social media. The popular Instagram accounts and the posts that get shared are mostly from the stereotypical, white adventurer. Their success is partially because they have been well represented for ages. And when brands go looking for partners, they feature those accounts with a lot of reach. Smaller accounts from POC or other people from a different background that do the exact same things, don’t get picked up. They’re not celebrated for what they’ve achieved, although what they’re doing is no different from what other people are doing. That creates this parallel cycle of underrepresentation. And representation matters.

How can the outdoor industry do better?

If the outdoors is for everybody, it should be seen through different eyes. Connect with initiatives such as Black Girls Hike, who really try to make a difference, and give them the support they need. Identify the groups that are hard to reach. Who are we not seeing on the trails? How do we reach them? How do we engage with them?

That needs to be at the heart of everything you do – not just written in your policy. Every decision you make, has to be after asking these questions. If you look around your boardroom and they’re all white, middle aged men, ask yourself: do we even know the answers to these questions? Do we need to bring in people from different backgrounds to this room, to help us to think about this? 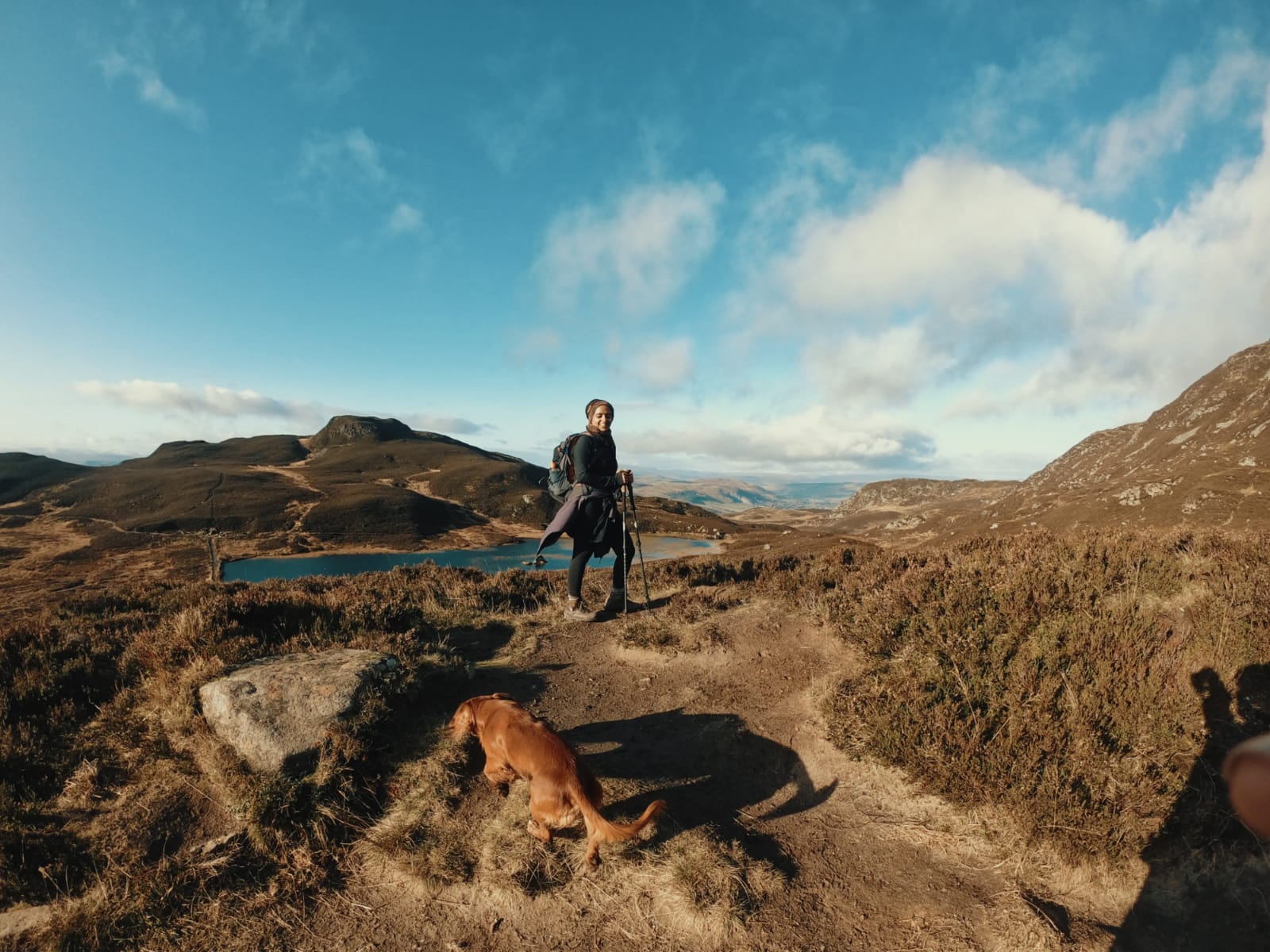 If a company is really concerned about diversity, we will be able to tell the difference. They’re not just choosing a picture for the color of a person’s skin. They’re celebrating the people for who they are.

In the meantime, people like you are already diversifying the outdoors by sharing their passion.

One of my goals is to get more women who look like me to enjoy the outdoors. When I started, I didn’t see anyone who looked like me. There might have been, but I never saw them, never heard their names, never read their stories. When people now see me, see how easy it is to get outside, they realise quickly: if she can do it, I can do it.

Your faith is at the heart of who you are. How does religion play a role in how you enjoy the outdoors?

I’d love to say that I got into hillwalking for it’s spiritual aspect, but I don’t. However, I’ve found a deeper connection through being outdoors. People often say the outdoors is our church. For me, it’s my mosque. You’re surrounded by this unfiltered, untouched, beautiful nature and when you’re religious like me, all you can think about, is the creator of all this beauty.

A few years ago, it really hit home when I was reading a story of the prophet Muhammed. He received the first revelation of the Quran whilst being in a cave in the mountains. It’s well known that he used to escape the hustle and bustle of the city and retreat to quieter places. I’ve read about these stories since I was a young girl and I know them by heart. But it wasn’t until after a few years of hillwalking, that I realized: I’m doing the same thing, that’s amazing! It changed the whole perspective for me. Ever since, I try to focus on spirituality throughout my walks.

My faith has taught me that the benefits of spending time in nature go beyond mental and physical aspects: it’s also spiritual. That adds a whole new layer for me. 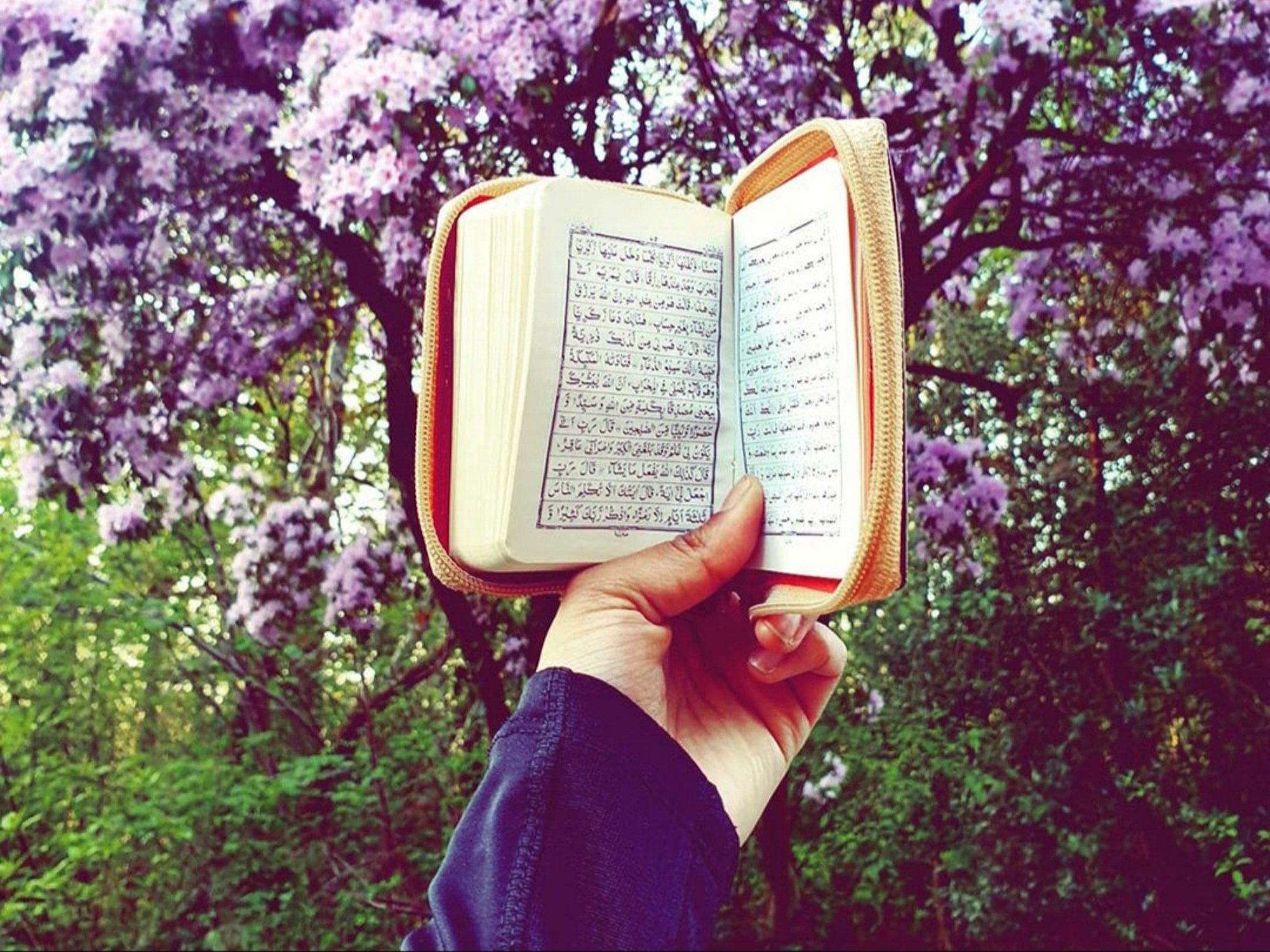 Can religion also be a barrier that keep minorities from enjoying the outdoors?

One of the things I struggled with at the beginning, is prayer. I pray five times a day, so long hikes would cover one or two of the prayer times. I tried to fit the hikes in between prayer times, although I have no issue praying outside. Praying on a hill however, will draw even more attention to me. A lot of Muslim women don’t have the confidence to just do it, especially not when they’re alone or in a group of Muslim women. Going with white friends almost gives you a better layer of protection against unwanted interruptions. If they’re not praying, they can redirect the questions or the attention.

Modest clothing can also be a barrier. As much as I applaud the Nike hijab, it doesn’t look very flattering. Most hijabi’s would laugh with each other and say that you look like an egg head. But there are so many creative ways to cover your head. Most Muslim women struggle with the question on how they will be perceived in the outdoors.

This brings us back to perception and presentation.

Well, it all really starts there, don’t you think? I get a lot of questions from Muslim women that show their lack of knowledge, all the things I was unaware of too before I got into hillwalking. They ask me how you can find a route, how to find your way to the top. They don’t know that, most of the times, it’s just one clear path all the way to the top. For people who’ve been on family hikes since they were small, this seems like such a basic piece of information. They fail to see that it’s just one cycle. These women don’t go because they don’t know. They don’t know because they’re not getting outside. And they’re not getting outside because they’re not represented.

We’ve uncovered a lot of accessibility issues. Is there anything from within the Muslim community that’s in need of a change?

It’s true that there’s also a cultural barrier. Not a religious one, though. My culture is very caring about everybody else around them. Family is at the forefront of everything – and that’s great, but it doesn’t leave much space to take care of yourself. There are kids to take care of, a husband, your in-laws, your parents and your siblings. All of the women in my life do voluntary work and work full time as well. They think about themselves last.

Often, when I take  Muslim friends or family members out for a walk, they realise it’s actually the first time they’ve done something just purely, selfishly, for themselves. It’s not that they’ve been told not to do it, they’ve often just never thought about putting themselves first. But you can’t pour from an empty cup. You need to take care of yourself, too. And the outdoors is a great place to start.

Zahrah in a nutshell:

Loch Lomond and The Trossachs, Scotland

Hillwalking, just got into climbing 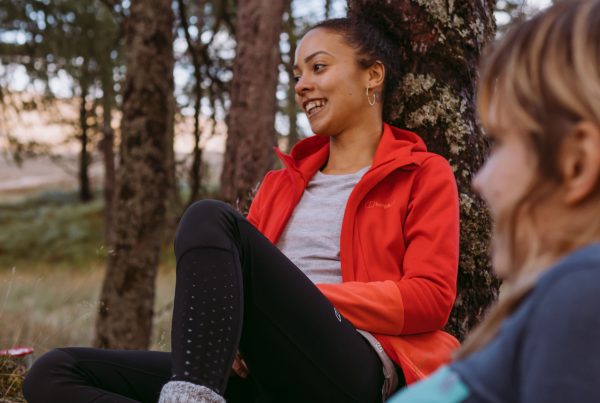 Carmen McIlveen: “Climbing is still too expensive for a lot of BAME households” 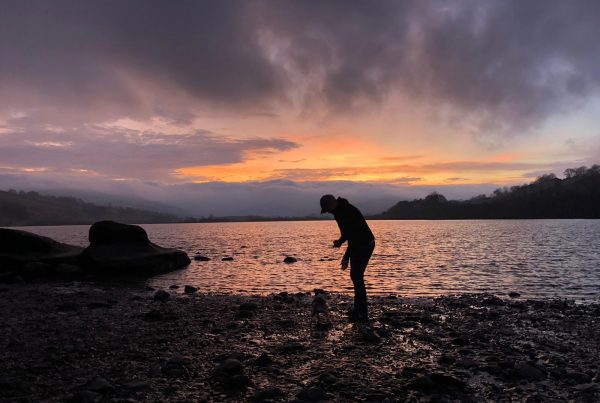 Matt Kettlewell: “My adventures in nature taught me how to deal with depression” 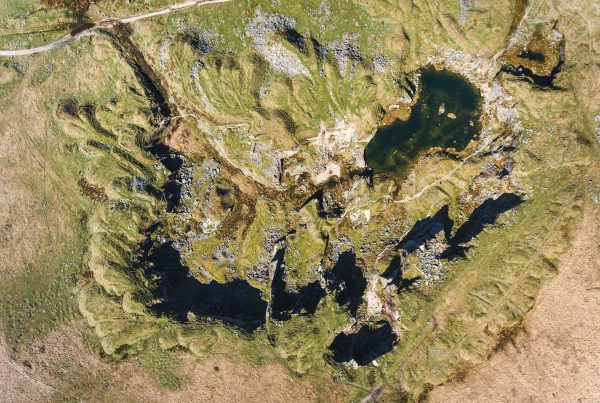 How to (legally) wild camp in Dartmoor National Park